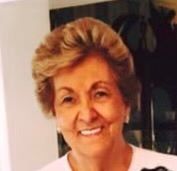 In addition to her father and mother, she was preceded in death by her brother, John L. Champlin, Jr.; sister, Vaddie Smith; sister, Beatrice Raleigh; brother, Alvin Champlin; and brother, Oba Champlin.

Naomi was a member of Central Baptist Church and of the Care and Share Sunday School class.  Over the years she enjoyed singing in the adult choir.  She also enjoyed investing in youth at Central Baptist Church and working with the youth choirs.  She enjoyed traveling with her husband Laymon to different destinations.  One of her favorite vacations was the Disney Cruise.  Mostly, her special joy came from spending time with her grandchildren and great-grandchildren.

Naomi was dearly loved and will be sorely missed.

Funeral services will be held at 2:00 P.M. Wednesday, December 21, 2022, at Central Baptist Church with Pastor Josh Pollitt and Tim Lowe officiating.  A private burial will follow in Cumberland Memorial Gardens at Lily.